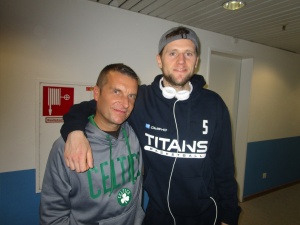 Miles Schmidt-Scheuber interviewing Janek Schmidkunz after the 79-68 loss in Frankfurt where he steered 12 points, five dimes and two rebounds

Janek thanks for talking to German Hoops. It´s been 2 years since the last interview we did when your season ended with Nordlingen. Has time flown by since then for you as you had stops in Gotha and Dresden?

I wouldn’t say time has flown by, but a lot of new experiences and different situations have filled the past two years. I am enjoying this journey as long as I can and think that I can reflect on what has happened over the past two years with a lot of positive memories.

I am very happy with moving to Dresden. After the success we had with Gotha as a team and overcoming the broken hand that sidelined me for three months, I wanted more security and a bigger role. Dresden wanted me to take over as playmaker and captain and I welcomed that kind of trust they put in me. It was a new challenge and therefore definitely the right decision. Finding new challenges is what makes you better as a player and as a person.

END_OF_DOCUMENT_TOKEN_TO_BE_REPLACED

Janek Schmidkunz is a 26 year old 183cm point guard that is playing his first season for the Giants Nordlingen. Last season as a rookie he played for the MLP Acaaademics Heidelberg. He started his basketball career with Central Hoops Berlin (Regionalliga) in 2008. He then also got further experience at ALBA Berlin II (Regionalliga). He then went to the states and played at Amer.Internat. (NCAA2) from 2010-2014 playing a total of 86 NCAA games and as a senior played 26 games: 10.9ppg, 2.1rpg, FGP: 38.5%, 3PT: 38.9%, FT: 61.5%. He spoke to German Hoops after the bitter 78-77 loss against Ehingen ending his season.

Thanks Janek for talking to German Hoops. A tough 78-77 loss to Ehingen to end the season.Head coach Mario Matic told me 5 hours before tipoff that he was very confident that his team would win. How confident did the team feel that it would give a lot better effort then in game one?

I think we shared his view on the game. It kind of reflects the way we went into our games all season and especially during the playoffs. Especially looking at the things that we did not do well in game 1, we knew playing at home with the great support of our fans, we would play a much better game.

Does the bitter loss effect lessen a bit when you think how hard the team fought from 15 points down in the first half to almost winning the game at the end instead of being beat by 20 points to end the season?

I think at first you are somewhat shocked that the season ends and especially it being a one point game you don’t realize it until that buzzer sounds. However, we did gave it our all and that is what I told everyone stepping on the court for the second half. So there are no regrets and I think it makes me proud that we played the way we did.
END_OF_DOCUMENT_TOKEN_TO_BE_REPLACED