my name is Manuel und I’ve been around the german basketball scene for more than twenty-five years now. For some years I was a writer for Eurobasket.com (2007-2011), and was co-hosting the only weekly german basketball radio show back in 2009/2010.

There are many decent blogs and fan forums that cover german basketball very well. Without a doubt schoenen-dunk.de is the number one fan forum in Germany offering very good insight of what is going on in german basketball. There are a couple of nice Blogs like gruebelei.de. And for sure Basketball.de is a helpful source.

But unfortunatly all of those pages are in german!

So if you can’t read and understand german there are now and then some good articles on several pages, and the german section of Eurobasket can keep you updated, but there clearly is a lack for english pages that cover german Basketball a little more detailled.

When I talk to import players I often wonder how uninformed they are about what’s going on in the domestic german leagues. E.g. the foreigner rule in germany’s second division that says that two domestic player need to be on the court at any time was something most of the guys I talked to never heard about.

So I decided to start a blog that tries to fill this gap and provide some insight views on german basketball for all who are interested, but can’t read german.

When I started this site back in 2009 , I did not expect so many positive reactions by readers, players, agents and even teams. Thank you again for the kind words!
But I had to experience that it would become very difficult “to keep up the good work” if I was going on on my own. So I decided to not let this become a one-person project.
Miles Schmidt-Scheuber is a german-american, who currently writes for Eurobasket.com. The german section on the site is without a doubt the best and most detailed one. Miles is responsible for that. Almost on a daily basis he publishes interviews with players and game reports.  He also has been the play-by-play announcer for Skyliners games for several years and broadcasted his 500th game in March 2017. Between 2006 and 2013 he was the host of Germany’s only weekly basketball radioshow and I was fortunate enough to be his co-host for two seasons.
As someone, who grew up in Boston, he has built some nice connections to people in the german basketball world. Miles knows players, managers, journalists, coaches and all arenas of germany’s elite league. But most important: he has a knowledge of the game basketball and I’m really glad that he decided to join the project! 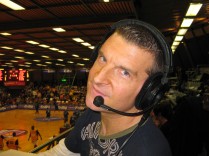 So, I hope you will like and appreciate our site!