The 2017 NBBL final was not even 30 minutes old and if one was roaming the catacombs in the Fraport arena, one would have observed intense sadness as IBAM players had their heads sunk low and others were feeling the sorrow even more like Johannes Klughardt as it was sinking in slowly. 19 year old Klughardt who started his career with TUS Uhrspringschule was in tears and was hugging his teammates like a 8 year old would their parents with that first overnight summer camp departure. He had made a clutch jumper and steal in the last minute to secure the IBAM win against Alba Berlin in the semi-final and the final was the last game for the German in the NBBL with this special group of guys as many will be too old to compete in the NBBL next season. Not only was Klughardt unhappy with the 94-71 NBBL final defeat at the hands of FC Bayern Munich as he also let some frustration out on an empty plastic bottle lying on the floor, but also his teammate 16 year old 186cm shooting guard and game changer Joshua Obiese who had a great semi-final game from the bench against Alba Berlin was feeling the grief of playing a last time with a very unusual  group of guys and was near tears as he described playing that last game with Stanford bound Oscar Da Silva. “This last game was very emotional for me. I had a very special relationship with Oscar. We spent a lot of time together training together a lot during the afternoons. It is really hard to let go”, stressed Joshua Obiese. However for some fellows the frustration and down period after a tough loss escapes a mind quicker as others like Oscar Da Silva was already in future mode as he had an intense talk with German U-18 head coach Alan Ibrhimagic for about 10 minutes listening about how he should prepare for the summer national team time and one could of orchestrated a wet tee shirt contest next to him or had Lebron James walk by him and the 18 year old would not have flinched or lost concentration with his matter at hand. The young German is all business and already has the type of strong mentality that will carry him far at the professional level. For Da Silva, it was just another big game with many more too follow as he produced 19 points, 12 rebounds, five assists and two steals and filled up the stat sheet like a Russell Westbrook. On the other side of the coin, the winners FC Bayern Munich were celebrating like no tomorrow, but one player won´t only remember the win, but also playing that last youth game against Da Silva. “It is always entertaining to play against Oscar. I never had as much fun as today as this was my first final. A guy like Oscar makes me so much better as you always have to play at a high level against him or you get eaten up”, warned FC Bayern Munich guard Nelson Weidemann. 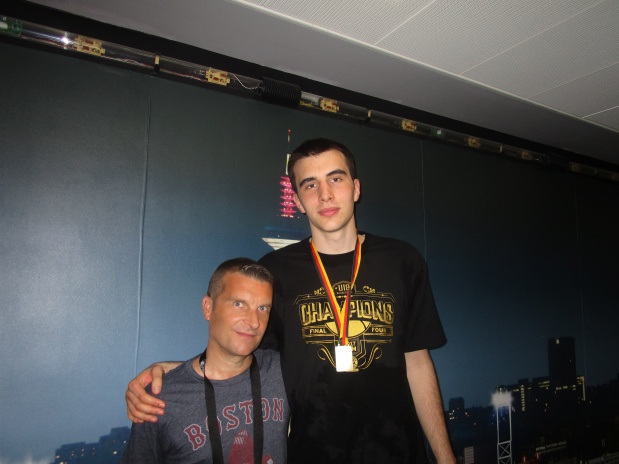 The 2017 NBBL final was a tale of two halves as the fans saw a very balanced and even game in the first 20 minutes, but in the last half witnessed a fatigued IBAM team fall apart and be unable to withstand the constant FC Bayern Munich pressure on both ends of the floor. IBAM was fatigued and FC Bayern Munich knew that and used it to their full advantage.