Lazeric Jones is a 28 year old 182cm point guard from Chicago, Illinois that is playing his seventh professional season and first with AS Monaco Basket (France-ProA). He has played in various countries in Europe like Israel, Greece, Hungary and Turkey. He has won three professional titles with two in Hungary and one in Turkey. He started his basketball career at Simeon Career Academy where he helped the school win the state title in 2007 while playing with Derrick Rose. He then played two years at John A. Logan College before finishing at UCLA. He spoke to germanhoops.com  after the 75-65 Eurocup win in Ulm.

Lazeric thanks for talking to germanhoops.com Was this your first time in Germany? What do you know in general about the country Germany and it´s basketball?

This was my first time in Germany. Ulm is a nice city. I have really enjoyed my stay here. I only heard good things about Germany.

Congrats on the convincing 75-65 win keeping a very offensive team like Ulm under 70 points. The way you have been defending in the early going, does this team have the potential to be a very good defensive team?

I think so. Coach is big on defense. As long as we give the effort I feel like we will always do well against any team we play. Sky is the limit for us this season on the defensive end.

You have played in many countries in Europe in Israel, Greece, Hungary, Turkey and now France. How cool has it been playing for AS Monaco Basket (France-ProA) and living in Monaco?

It has definitely been different. Monaco is such a beautiful place. The organization has been great and given me everything I need to be comfortable. The weather is great and I love the view.

END_OF_DOCUMENT_TOKEN_TO_BE_REPLACED 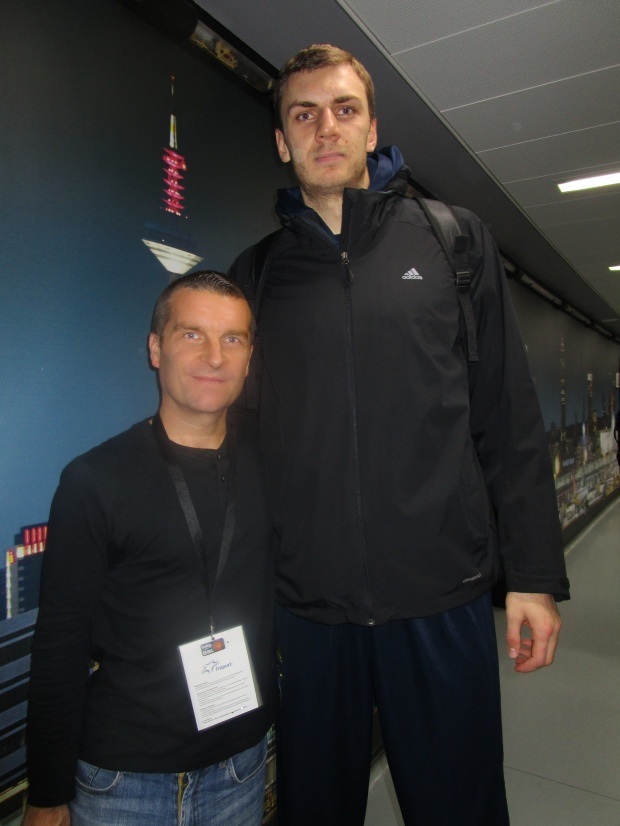 Elmedin thanks for talking to German Hoops. Welcome back to Germany. With Alba Berlin you never won in Oldenburg. With what kind of feelings did you return back to Oldenburg?

Oldenburg is known as having sa trong home court with great fans and it is always hard to play there. We are having a great season so far and we prepared well and I think our win is well deserved. Oldenburg is a tough team especially on their home court. They have great shooters and play very aggressive defense. In the Bundesliga it is even harder to play them than in the Champions league because their gym is sold out and you know that 6000 fans will be against you.

You beat the EWE Baskets Oldenburg in Monaco and returned back to Oldenburg with an undefeated Basketball Champions League record. Congrats on a hard fought 84-78 win. The game was back and forth in the second half, but what was key for taking command of game in fourth quarter and winning the game?

Thank you. Key was our great energy and aggressive defense. All the teams have special motivation against us because they want to stop our winning series but we don’t want to stop. We were missing Craft and Sy but we found additional energy to win this game.

You played against Rickey Paulding the last years and he hit you for 23 points. It seems like every player can tell some kind of story about him. How did you get to learn about Paulding the player? He will retire from the BBL as one of it´s absolute legends?

He is an absolute legend playing ten years for Oldenburg. He showed a million times what kind of player he is. At the age of 35 he looks like a youngster playing with so much energy putting so much effort pushing Oldenburg in key moments. He is a great leader and I don’t think he will retire soon. Watching him now he could play a couple of years on this level. Big respect for him.

END_OF_DOCUMENT_TOKEN_TO_BE_REPLACED

Thanks Aaron for talking to German Hoops. You have played in Hungary and Italy as a professional and in the G-league. You didn´t make the trip to Oldenburg. Did you get hurt in the last game?

I suffered a light injury. Since it´s early in the season, the club wanted to stay cautious and not risk me getting more serious injury. So that is why I didn´t make the trip to Oldenburg.

What do you know in general about the country Germany and it´s basketball?

I know Germany is large and I have only heard good things about the league from my ex teammate Dru Joyce. He said that it´s a good and comfortable place to play where the money arrives on time. Last season I had the opportunity with Trento to scrimmage Munich and Bamberg. Those are great teams and it was a great experience playing against them.

END_OF_DOCUMENT_TOKEN_TO_BE_REPLACED

Nik thanks for talking to German Hoops. Welcome back to Germany. You played as a rookie in Germany for the Artland Dragons and have played in Germany over the years like against Alba Berlin in the Euroleague. With what kind of feeling do you have returning back to Germany?

I have great memories of my time in Germany. Playing for coach Fleming was a great experience, he helped prepare me for the rest of my career in Europe. I have a lot of respect for him as a coach and as a man, great guy and very hard worker. One of the things I remember most about my time in Germany was the fans. All of the teams had great support from their fans and it was really fun to be a part of such a passionate basketball culture.

END_OF_DOCUMENT_TOKEN_TO_BE_REPLACED

When taking a closer look at the beautiful bustling coastal town of Monte Carlo, one of the last things that one would mention would be their basketball team AS Monaco. The first things that pop into mind about the chic town Monte Carlo is the glitz and money that it has to offer not to mention the sheer beauty of the French Riviera coupled with the picturesque mountains that lend the perfect back drop to a place that many people dream of just being able to visit one day. Other highlights about Monte Carlo is the Formula One race that takes place each year or the posh Monte Carlo casino or spending a free hours in front of the famous Hotel De Paris to see just how many celebrities one can spot. Many also come to Monte Carlo to get a taste of their royal family and to see if they can spot prince Albert. One also can try to come up with a list of how many famous people have lived there over the years to save on taxes as the list is massive as guys like Boris Becker brought it into fashion already in the 80´s while over the years a handful of Formula One drivers have called this dream world home. However Monte Carlo also has a basketball team AS Monaco that after numerous years of having totally fallen in obscurity falling from the France Pro A and having played as far back as the fourth division only five years ago moved back to the elite division in 2015 and right away made a bang winning the regular season crown, but falling in the playoffs in the semi-finals. This season the club has found back to it´s success from last season and is a top the France pro A with a record of 9-2 and in the Champions League is 6-1 . The club is also known as being a type of recluse for former BBL players as their present roster boasts four players where Fraport Skyliner Quantez Robertson has faced two. He could have faced three with Zack Wright, but was injured during the 2013-2014 season embarrassing 73-43 loss in Bamberg . Ex Maryland(NCAA) star Nik Caner-Medley´s first team as a rookie in 2005 was the Artland Dragons. Robertson faced Jamal Shuler in the 2009-2010 season where Shuler played his last in the BBL for Trier before heading to France for good, and had most of his duels against California native John Bryant when he played with Ulm and Munich from 2010-2016. Shuler got the last laugh on Robertson at the 2010 BBL Allstar game slam dunk contest in Bonn winning the crown. Robertson and the Fraport Skyliners split the season series in each season from 2010-2016 with John Bryant but the big man that got the nickname big country during his years in Germany got the better of both in 2015 winning in the playoffs 3-1. AS Monaco came to Frankfurt reeling off a 98-83 loss against Paris, while the Fraport Skyliners entered the game with new focus and life after snapping their 6 game BBL losing streak with an exciting one point win in Braunschweig. AS Monaco was without Jamal Shuler who was nursing an injury and stayed in Monte Carlo and apparently they didn´t need him as they gutted out a 70-64 win in Champions League action.

Quantez Robertson wasn´t only disappointed with the loss but also that he couldn´t get revenge on Jamal Shuler as he also beat him two seasons ago in the Eurochallenge Top 4. The Fraport Skyliners coughed up the ball 22 times including nine times in the third quarter and Robertson had four in the first quarter. “It is always nice to play against familiar faces that you have played against before. You may not know them personally, but it´s always fun. Shuler is a good player. I remember the dunk contest in Bonn. I really thought that I got robbed.Derek Raivio gave him a soccer pass and the crowd went crazy and he caught it on the second bounce. I guess soccer is big in Europe and that helped him. We had too many turnovers. We also were unable to move the ball well in clutch situations. I think I might have had four turnovers in one quarter in college. Tonight I tried to make the big play too much instead of the right play”, stressed Quantez Robertson.

END_OF_DOCUMENT_TOKEN_TO_BE_REPLACED

Jamal Shuler is a 31 year old 191cm shooting guard from Jacksonville, North Carolina that is playing his ninth professional season, sixth in France and second with As Monaco. Last season with AS Monaco he played 40 games averaging15.9ppg, 3.7rpg, 2.8apg, 1.1spg, FGP: 44.0%, 3PT: 35.2%, FT: 88.7%. He started his basketball career in 2004 with Va Commonwealth (NCAA) where he played until 2008 and as a senior played 32 games averaging 15.5ppg, 4.7rpg, 1.3apg, 1.5spg, FGP: 44.0%, 3Pts: 41.3%, FT: 79.8%. He turned professional in 2008 with TBB Trier in Germany and played there until 2010. Then he went to France and played for teams like JA Vichy Val d’Allier Auvergne basket, Sluc Nancy Basket Pro, and JSF Nanterre. He also played a season with Khimik-OPZ Yuhzny (Ukraine-Superleague). He spoke to German Hoops before the Champions League game against the Fraport Skyliners in Frankfurt.
Jamal thanks for talking to German Hoops Welcome back to Germany and Frankfurt. It has been a while since you played in Germany. Back in the 2013-2014 season you lost two Eurocup games to Alba Berlin. Where would you rank the giant Mercedes Benz arena in Berlin in your all-time best arena´s that you have played in?

Berlin’s arena is definitely one of the top gyms in Europe! It’s always fun to play there because of the competition and also because the crowd was always great!