Ok after six games it is obvious that Fraport Skyliner Jason Clark won´t be stealing Jared Jordan´s nickname Mr Pass anytime soon, but the ex Georgetown standout supplied the needed energy and scoring punch when the team needed it most helping carry the 2016 FIBA Europe Cup winner to it´s second Euro Cup win over Rytas Vilnius 70-61 as it´s record grew to 2-1. You have those pass first point guards and you have the scoring point guards and Clark definitely belongs to the latter. So far this season he has shown his moments in the playmaking category and been that scorer he was brought in for scoring 16 points against Turin and Vechta. There has been criticism that the club has a point guard problem, but does it really? The season is young and the team continues to find ways to win and in the second half it was the point guard duo of Clark and Bell Haynes that took control and were vital in the team escaping with a win. The American who made a name for himself in Belgium playing most of his professional career there and is on the way of doing the same thing in Germany now was in good spirits shortly before boarding a plane in Lithuania back to Germany the day after and was content about the victory “The key to the win was our defensive intensity. We brought it from the start and did a good job continuing to do it in the second half”, said Jason Clark. 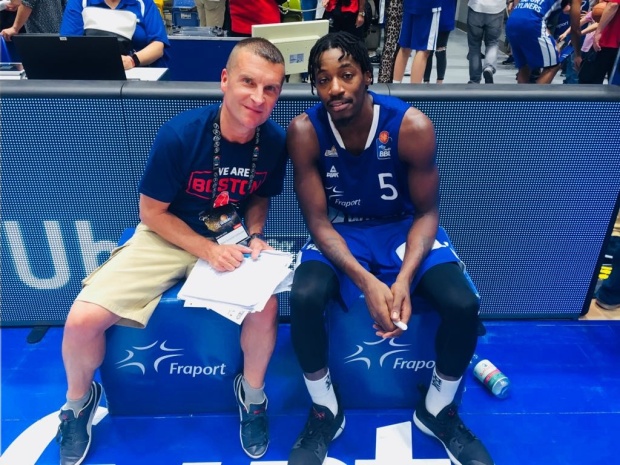 Miles Schmidt-Scheuber and Jason Clark after a game in Frankfurt. Clark led a second half charge in Vilnius helping the Skyliners to big 70-61 win as he steered 14 points

Fraport Skyliners head coach Gordon Herbert wasn´t happy with the overall effort in Vechta last weekend and began the game keeping ex NBA player Erik Murphy and Clark on the bench. That didn´t seem to go well with the club as they started nervous and very shaky quickly getting into the hole trailing 10-2. Murphy was brought in and that rapidly changed as he became an explosive scoring monster as he tallied 21 points at the break, but the Frankfurt was only up 36-34. “We all know what Erik can do. He is a great shooter and can always cause match up problems. He showed real explosive scoring abilities, but we know that he is capable of that”, added Jason Clark. One guy that the Fraport Skyliners really need on a consistent basis is Canadian sniper Brady Heslip, but when he doesn´t get balls, his game suffers and so does that of the team. In Ludwigsburg the opponent really keyed in on him and he finished with 0 points. In Vilnius some offensive fouls broke the team´s game and he didn´t get the ball and he finished with 0 points. The problem of not getting Heslip involved obviously can be traced back to the point guard position, but Frankfurt was lifted through very good team defense, Murphy´s scoring genes and Quantez Roberton´s overall play and his playmaking qualities in the first half as he continues to be that third point guard. “Tez filled the stat sheet like always. He could get a quadruple double if he wanted to. He does so many things that are unseen. We appreciate his game so much. Without him we wouldn´t get so many defensive stops and rebounds. He was our key to the success”, warned Jason Clark.

Miles Schmidt-Scheuber and ex NBA player Erik Murphy at the 2018 Gezeiten Cup. He scored 21 points in the first half in the Eurocup win in Vilnius finished with 23 points

One guy that Frankfurt couldn´t totally contain was DJ Seeley. He finished with 19 points and gave Frankfurt some problems early, but nothing that effected them too much. Clark had never played against him and only seen him on TV, but was impressed with the play of the veteran. “He is a good player. He really knows how to play with great pace and has a knack for knowing how to get off the shot”, stressed Jason Clark. The game was tight going into the third quarter, but that is when Jason Clark lit fire and took over. He showed the qualities of past great Skyliner point guards like Jordan Theodore and Justin Cobbs who always had the ability to take over games when the club needed it most. The American had 2 points at halftime and two assists and most likely wasn´t content with his game, but in the third quarter he showed his scoring mentality and rattled off 10 points in a row scoring 12 points in the second half and finishing with 14 points. “Coach Herbert didn´t tell me to do anything different at half-time for the second half. My play came by the flow of the game. This is something that happens. My play wasn´t anything out of the ordinary. I didn´t take any crazy shots, but was just feeling good with my shot”, explained Jason Clark.  Clark has been up and down this season with his shooting, but has always stressed that he believes in his shot and that eventually it will fall on a more consistent basis. That is what happened in the second half and coupled with the team defense holding down the fort, the Fraport Skyliners were able to see some daylight get a comfortable lead and ride into the sunset with a well deserved win against a tough team. “We didn´t really make any adjustments in the second half. We just upgraded our defensive intensity. We continued to do a good job stopping their sets and continuing to force them to tough shots like in the first half. They have very good three point shooters and we did a very good job taking away their three”, stressed Jason Clark. 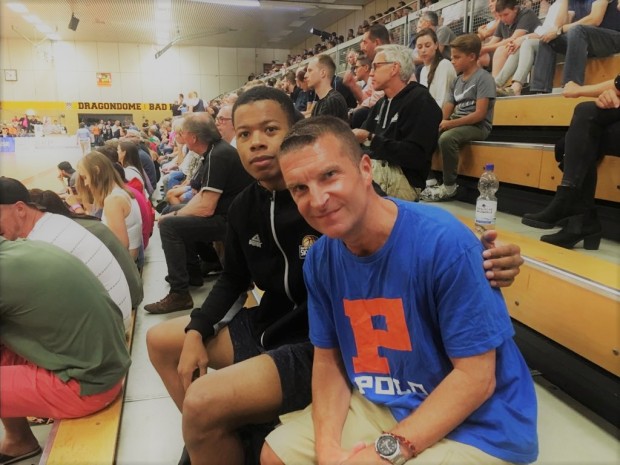 Miles Schmidt-Scheuber and Fraport Skyliner canadian Trae Bell-Haynes at the 2018 Gezeiten Cup in Rhondorf. He steered 11 points in Eurocup win and made big buckets in the second half conserving the win

Canadian rookie Trae Bell-Haynes also stepped up in the second half hitting big shots with his seemingly unstoppable penetration and finishing and ended up contributing 11 points. He did this masterfully in the huge cup win against ratiopharm Ulm a few weeks ago and did it again in Vilnius not allowing the opponent any air to breathe. In the end the twopoint guards Clark and Bell-Haynes finished with an impressive 25 points, but only dished out 4 assists. Even after this win there will still be people seeing a point guard problem with the Fraport Skyliners, but there is a difference between having a problem and just being inconsistent. For being that very good point guard the player has to be able to know when to score and when to put his teammates in the very best position to score. Having this balance is key to being a good point guard and with the combination of Clark´s great scoring ability and Bell-Haynes pass first qualities, this is something that will continue to take time to gel. So far this season Clark and Bell Haynes have shown both, but not at the same time. But really does a good point guard have to always score 22 points and get 13 assists like a Chris Paul or John Wall? You won´t see those kind of stats on a regular basis at the higher levels in Europe. So was this great team win in Lithuania the break out game for the Frankfurt point guards? “I would probably say it was. Obviously we could of got more assists. I thought we rebounded well after the tough game in Vechta. Coach wanted us point guards to be more aggressive on defense here and I thought we did that. Our aggressive defense sparked our offense”, warned Jason Clark. Another good sign that the point guards as well as the rest of the team did good was that it took good care of the ball coughing up the ball only 9 times and forcing them to 15 turnovers. The rebounding work continues to be a work in progress as they lost the paint battle 33-26. Another important aspect that the Fraport Skyliners have continued to show in the early going is that even when times are difficult, they find ways to win. Their next challenge awaits them on Sunday as 2010 Eurochallenge champion BG Goettingen come to town. They have had a very solid start reaching the cup quarterfinals and have a current two game BBL winning streak having destroyed MBC by 42 points and edging Wurzburg 91-87. “We feel good going into this game. These are the type of games that we must win. We have to build on the win in Lithuania and not take a step back. We can´t get complacent, but continue to build off wins and work on our mistakes”, warned Jason Clark. But one thing is for sure all eyes will continue to be on the Frankfurt point guards as they will be looking to continue to grow more into their roles and Jason Clark will battle top BBL point guard Michael Stockton. A challenge that he will be up for and another opportunity to prove that Gordon Herbert made the right choice in getting him with another good game.