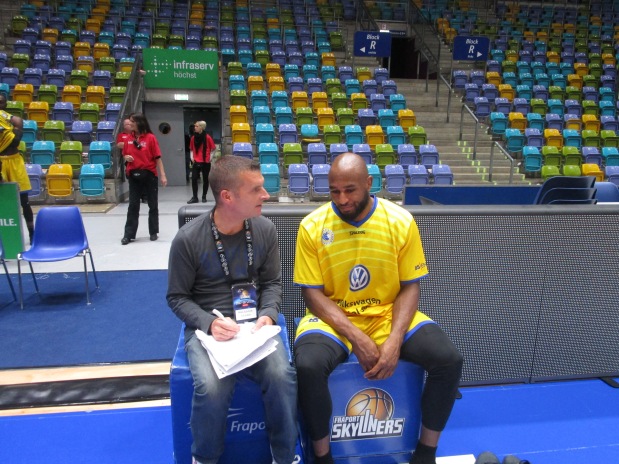 Miles Schmidt-Scheuber has covered the Cinderella career of Deandre Lansdowne since he played in the Pro B with Herten via Pro A team Hamburg Towers. The American has adjusted well to the BBL as he dropped 11 points and dished out 6 assists in a 78-71 loss in Frankfurt

Deandre thanks for talking to German Hoops. Where are you at the moment and how did you celebrate the holiday season?

Hi, Good speaking with with you again. I’m in Braunschweig. I didn’t do much. We had quite a few games the last weeks. So I’ve just been focusing on basketball. But the good part is my mother has been in throughout the holidays, so it’s been nice spending time with her.

Nope, nothing new. I would say Hamburg had a better holiday season with their huge Christmas market.

Congrats on reaching the easyCredit BBL in your third season with Braunschweig. In our last interview in April 2017 you stated that “My Next Step Is To Be One Of The More Dominant Players In Pro A”. Did you not sell yourself a bit short? You must of felt after that strong Pro A season that you could reach the BBL or not?

My plan was always to get to the BBL, but if I happened to play in Pro A again, that was my goal, so that I could only spend 1 more season there.

Would you call your Cinderella story as over simply because you have reached the highest level in Germany or is it continuing?

I’ve been told it is, but to me, I’m not satisfied just getting here. Many guys dream to do what I’ve done, few have done it. It’s truly just a blessing and honor. I also just want guys to believe it’s possible, if you put in the hard work, and be professional.

The Basketball Lowen Braunschweig had already 6 wins as much as last season before the turn of the year. How proud have you been of the team fighting so hard and being rewarded with wins?

I’ve been really proud! We are a hard working group, who never gives up. We believe we let a few games slip, and should have a few more in the win column. But we expect to have an even better second round.

The season isn´t totally saved yet, but your on a good way. What are the main goals of the team now in the second half of the season and does it have the needed confidence to get some more wins against better teams in the standings?

Just to continue getting better individually and as a team. Those things happen, we’ll be quite fine when the end of the regular season comes.

It seems a bit surprising that the team is such a potent scoring team averaging 81 points despite not having the most depth. How can the team become even a better scoring team now? If you would just give up 5-10 points less, you would be in a totally different area in the standings. Does this team have the effort and mentality to want to defend better?

Yes, that’s our main focus, DEFENSE! We can score the ball on any night, even when we’ve had a low shooting percentage. But you must defend for 40 minutes to compete with the best teams.

You lost one of your other top players in Jarekious Bradley. How do you feel have you compensated his loss best as club?

Just moving forward. Things happen, you must focus on the future though. We welcomed Jaramaz with open arms. Getting him in the right place l, and feeling comfortable was most important.

Let´s talk about your game. Your putting up strong stats and needed no adjustment period from the Pro A. What have you noticed as being the biggest difference between the BBL and Pro A?

Speed! The game flow is faster, the decision making is faster, guys are faster! It’s what I like best!

Was the 99-88 win against Champions League team EWE Baskets Oldenburg where you steered 22 points one of your biggest wins as a professional?

Not necessarily, it was a big win, but we as a team expect to win at home games against anyone. I myself don’t feel shocked when I have a good game, I expect to play well, night in and night out.

What exactly is your role this season with the Basketball Lowen Braunschweig. Is it much different from what you had with the Hamburg Towers?

Being great on the defensive end, being a great leader, and just be aggressive offensively. Confidence in my shooting and attacking the basket.

In our last interview you stated this about your development in the Pro A “. I saw the game easier, and in a bit of a different style. Only helping expand my basketball IQ, and how to be a better player. How much of this knowledge has helped you make the adjustment to the BBL better?

It helped me adjust and be ready to play at this level. I’m still learning, still growing and still getting better though.

You had a tough 111-53 loss against top team FC Bayern Munich, but netted 10 points. Are these the kind of games where you take the time on the bench and study what FC Bayern Munich´s top players are doing and try to soak up something that will help your game?

Sure are! I go back and watch the games against the top teams. I’m also watching a lot of eurocup and euroleague games as well. Seeing where I need to get better to play at that level.

Now that your in the BBL you have made it to the big time. Is the chip on your shoulder removed or lighter now? Despite the success and development in your game does a player with a known chip never totally lose it, because after a while wanting to get further and further up the ladder becomes a obsession?

I have an obsession of being great. I’m never satisfied with where I am, I always want to keep climbing. I want to continue learning more, getting better, and playing basketball at a high level. But I also never lose sight of how far I’ve come and how much I’ve enjoyed the ride.

Now that you have arrived in the BBL what have you learned to appreciate most about this experience?

Nothing is promised! Just enjoy the moment! But in a sense of, enjoying the moment but knowing if you get comfortable you can be on a plane home any day.

How do you summarize the 2017 NBA Draft. What sleepers do you see playing a role in the NBA?

Think all the top pick are great players. Kuzma was the drafts sleeper.

I Still think they need an inside presence, and a defensive mentality to beat the GSW.

Random trade in my opinion. But we still must wait until Thomas returns and gets comfortable in the Cavs system to see if it was a good trade for the Cavs, or only the Celtics.

Where will the journey of the Oklahoma Thunder go this season with Westbrook, George and Anthony? Can they make a serious run in the west?

I think they both leave this summer. Haha

Thanks Deandre for the chat.