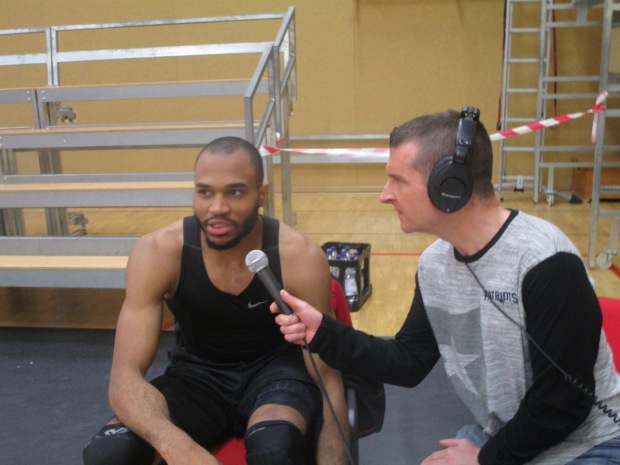 Vee, thanks for talking to German Hoops You’re playing your third full professional season with the Sharks Antibes (France-ProA). It took you many years of hard work to finally get the real recognition that you deserve for the talent that you have. How good is life for you at the moment playing the game that you love?

Hey miles! Yes all is good I’m enjoying the opportunity to play and do what I love. Far as recognition, we all have different routes in life. Mine just has happened to be a little longer but it has built character and humility up through the journey.

Last season you played in Wurzburg, Germany and this season with the Sharks Antibes. In what place did it take longer for you to find a Mcdonalds or Burger King?

Definitely in Würzburg, Burger King here in Antibes is right on the way to the gym I see it every day before practice.

You are living in paradise. Antibes is squeezed in between famous places Cannes and Nice and Monte Caro. Do you sometimes have to pinch yourself to even understand how blessed you are at the moment?

I have definitely grasped the beauty the south of France brings. And yes it’s a blessing to be in this mild to warm weather seeing the beach and wearing shorts almost anytime I want.

Your living on the beach. Is it at times difficult to concentrate on basketball or has your work ethic continued to be spot on despite the outside distractions?

No distraction at all. I understand that what I do is a job. And I take care of my business rain, snow, sun and sleet.

You had a great Pro B season in Germany and also convinced everyone of your abilities in the BBL with Wurzburg. How was last summer´s transfer period for you? Did you have many offers and what was so enticing going to Antibes?

Honestly last summer transfer period went well. I had a few German teams with offers on the table. But I felt the best move for me was to pursue basketball in France with Antibes.

On what things did you focus on last summer in improving in your game? How have your weak spots in your game improved this season?

I put in a lot of work with my trainer Tory Robertson. Worked a lot on picking spots mid range pull-ups. Ball handling pretty much everything and getting my body stronger. I gained positive weight over the summer. From 200 to about 210 lbs. So I can say it went pretty good!

The club didn´t have the best start, but has a lot of potential. Is this a team that will be able to heighten their game as the season progresses?

I believe so. We have a very good team with a lot of upside. As every team at the moment we have some things to work on. But I feel it’s best we have our struggles early and hit our stride at the right time of the season. Marathon mentality not sprint.

The club allows more points than it scores. Do you feel like the club will be able to get more on the same page as the season continues?

I believe it’s something we will improve on greatly. Just a matter of time though.

How stimulating has it been playing with short point guard Jerel Blassingame? The guy has seen it all. He belonged to the best point guards in the Euroleague competition in the 2013-2014 season. What have you appreciated most about his game and character?

Man this guy Jerel has went above and beyond on helping me with everything on and off the court. A true floor general and a guy I go to for questions about reads and running the team when I play the pg spot. He sees things before they happen. I’m very thankful to have an experienced guy as my running mate.

What do you feel has been the most valuable thing that Blassingame has given you this season as you continue to develop your game?

To be myself. Every game every practice Jerel reminds me to be myself play my game and be me. If there is something I missed far as a read he will tell me “vee” next time watch out for this or that etc. He has taught me a lot.

You are averaging 28 minutes per game this season and you are having a great statistical season and have continued to make strides where you left off last season. It seems like you have come well to terms with the guard competition with Blassingame and Harvey?

Each of us brings a different dimension to the game from the guard spot. Jerel as a floor general. Me as a defender and attacker, and Tyler with his scoring ability. It definitely has its perks.

What exactly is your role this season? You are one of the main scoring threats, but what other things does the club expect from you?

Being a leader is something I feel I’ve really stepped up on this year. Being vocal and leading with my energy. My role is to be a complete guy.

Both leagues are top tier. I can say far as pace France is fast pace. Up and down very athletic league. Germany in my opinion is inside out and pound league. Both are pretty fitting to my game though. I am able to adjust to anywhere I play.

In the 91-73 win against Asvell you led all scorers with 21 points and outdueled top guards John Roberson and AJ Slaughter. Do you feel like your on a good way to gaining the respect that you deserve this season that will forever keep you at a top level and keep you far away from leagues in Iceland and Columbia?

That was a very fun game because I played against AJ Slaughter a guy I looked up to and watched play back home in Ky. with Shelby county(KY) and Western Kentucky. But I do feel I’m gaining respect. I play with a chip on my shoulder because of where I come from and what I’ve been through. I feel that after every game I want my opponent to know I can play this game.

With the success that your having now do you sometimes think back what would have been this season had Wurzburg kept you? Wurzburg is having a lot of success this season and could have kept you.

Sometimes because I really enjoyed my time in Würzburg and the people there. It was a great opportunity and till this day very thankful for the club and coach Dirk on giving me the opportunity. Würzburg has a great team with great players. I had the opportunity to come back to Würzburg but I wanted to give France a try. I wish them the best this year.

Are you confident that your friend Marcellus Barksdale will find a team this season or is his short professional career coming to an end?

Very confident ! I understand it can be very discouraging because I’ve been in his shoes before. But it just takes time and the right situation I was home all year in the 2015-2016 season grinding. I know his next opportunity he will kill wherever he plays as he did his rookie season. Hopefully a team in the pro a Germany gives him a chance.

Lebron James failed to win his fourth NBA title and is still three away from Michael Jordan. Where does Lebron stand right now in your opinion in the never ending debate of who is the best of all-time?

In my opinion he his the greatest small forward of all time.

Not at all Westbrook plays his heart out. I feel it’s all genuine when he plays.

How do you summarize the 2017 NBA Draft. What sleepers do you see playing a role in the NBA?

My sleeper is the Kuzma kid. Along with Dennis Smith jr.

Anything can happen. But I hope Okc wins the west. Key word was hope though.

I think it was fair. I believe Kyrie is playing like a legitimate MVP.

Where will the journey of the Oklahoma Thunder go this season with Westbrook, George and Anthony? Can they make a serious run in the west?

I believe they can win the west if they click together. Golden State is tough though.

Thanks Vee for the chat.