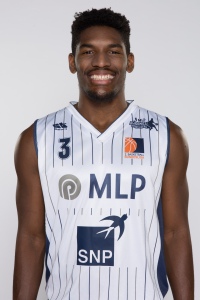 Jaleen thanks for talking to German Hoops. Congrats on a solid rookie season in Germany. However your season ended on a sour note losing to the Romerstrom Gladiators 3-2 after being up 2-1. How disappointing was ending the season like this?

There is No disappointment here. I’m so glad to have started my rookie season with great coaches, players, and Management. Yes I wished we would’ve won the series, but that takes nothing away from the great season MLP Academics had this year.

Were these the toughest two back to back loses in your young career? Did this compare to anything you witnessed in the NCAA?

Man the Game 4 loss in Trier really hurt. We just didn’t finish the game at the end. Game 5 was just an experience that I will remember for the rest of my life. Even though I haven’t played a lot of professional games, this maybe was the funniest series I will ever play in. This series compares to nothing in the NCAA it’s really different.

END_OF_DOCUMENT_TOKEN_TO_BE_REPLACED 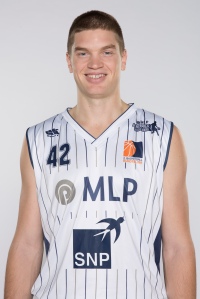 Evan McGaughey is a 24 year old 203cm forward from Carthage, Illinois that completed his rookie season in Germany with the MLP Academics Heielberg averaging 11.8ppg, 6,4rpg and 2,1apg while shooting 41% from outside. The American played an illustrious career at Quincy(NCAA”) where he averaged double figures in scoring average each season. As a senior he played 25 games averaging 16.6ppg, 8.3rpg, 2.0apg, 1.2spg, 1.4bpg, FGP: 58.2%, 3PT: 50.6%, FT: 77.8%. He spoke to German Hoops after his rookie season in Germany.

Evan thanks for talking to German Hoops. Congrats on a solid rookie season in Germany. However your season ended on a sour note losing to the Romerstrom Gladiators 3-2 after being up 2-1. How disappointing was ending the season like this?

Hey Miles! We had quite a season this year. It definitely ended on a sour note for us though. It’s hard to lose in the playoffs like that after you work so hard all season to get to that point. The day after a season ending loss is always the hardest, but I’m sure in a few weeks we will be able to look back on the season and be proud of what we did.

Was these the toughest two back to back loses in your young career? Did this compare to anything you witnessed in the NCAA?

Yes, I would say these are the toughest back to back loses I’ve ever experienced. It’s a little different in the college post season, because if you lose once then your out. In a playoff series you still have hope after each game. We just weren’t able to put the series away when we had our chances.

END_OF_DOCUMENT_TOKEN_TO_BE_REPLACED

Evan McGaughey is a 23 year old 203cm forward from Carthage, Illinois that will be starting his professional basketball career in Germany with the MLP Academics Heielberg. The American played an illustrious career at Quincy(NCAA”) where he averaged double figures in scoring average each season. As a senior he played 25 games averaging 16.6ppg, 8.3rpg, 2.0apg, 1.2spg, 1.4bpg, FGP: 58.2%, 3PT: 50.6%, FT: 77.8%. He spoke to German Hoops about basketball.

Thanks Evan for talking to German Hoops Where are you at the moment and how is your summer coming along?

Currently at the golf course right now. I usually go golfing with my dad on Sunday mornings. Getting in a few more rounds before I leave.

I have to commend you about your name Evan. It´s a great name and I should know since I just named my first son like that a few months ago. When you think of the name Evan what comes to mind first?

I usually think of taller people when Evan comes to mind. It’s weird, but the few Evan’s I know seem to be taller.

Congrats on signing with German pro A team MLP Academics Heidelberg. If someone had told you coming from West High School 5 years ago that you would be  a professional basketball player in 2017 what would you have thought?

I honestly wouldn’t have believed them. Coming from Illini West High School with less than 400 kids in the school, not many of them become a professional athlete. I’m excited that it actually happened though!

END_OF_DOCUMENT_TOKEN_TO_BE_REPLACED

Vance thanks for talking to German Hoops. Congrats on the big 64-49 win against Nurnberg. Coming into the game Heidelberg had lost three of four games. How important was getting the win and is this the start of a longer winning streak?

Losing 3 out of 4 games is very tough but I hope we learned from each of those games. It was very crucial that we went to Nurnberg to handle business and get back on the winning side of things. Hopefully this is a start to a longer streak of wins

Last week Diante Watkins went off for 34 points. This time you held him to 14 points and six turnovers. How vital was it really making basketball life difficult for him for 40 minutes?

It was very important for us to limit him in that game and we did so by team defense. That was one of our goals for the game.

END_OF_DOCUMENT_TOKEN_TO_BE_REPLACED

It may only have been a year ago that the Giessen 46ers and MLP Academics Heidelberg last met in the Osthalle in Giessen, but as is so often in the business of basketball in Germany, players come and go each season as rapidly as the daily gossip stories about Kim Kardashian. At the end of last November, the MLP Academics rolled into the Ost Halle in Giessen with a lot of confidence coming off their huge 107-69 victory against the Cuxhaven Bascats and they had no mercy for the ex Beko BBL team Giessen has they halted their four game winning streak with a bitter 66-60 win. If one looks back to that game, one observes that there were only a total of three players on the floor for both teams with TJ Dileo and Benjamin Lischka of the Giessen 46ers and Nico Adamczak was the only player that had strapped on the Heidelberg jersey that were on the floor again in Giessen a year later. Giessen came into this game with Heidelberg with a 4-2 record at home and having won the last two road games in Paderborn and Nurnberg while the guest was playing spirited basketball the last weeks having won four of the last six games including big wins against the s.Oliver Baskets Wurzburg and Science City Jena. For the two Giessen players DiLeo and Lischka there was definitely the revenge factor and pride issue, but as soon the game started their thoughts were only on the 40 minutes ahead and after a slow first four-five minutes, the Giessen 46ers found their rhythm, had a huge game from the tornado force Yorman Polas and the unsung hero was Besnek Bekteshi with his defense and the team got stronger in the second half powering past the MLP Academics Heidleberg 74-53. “The revenge factor was there, but I didn’t think about it. It is a new year and new players. They had won four of their last six games and we knew that we had to be ready and were. We showed real Giessen basketball tonight. We played tough defense forcing them to turnovers and got out on transition. Our big men did a great job running the floor and on offense played good pick and roll, made the extra pass and made shots”, stressed Philadelphia native TJ Dileo. The MLP Academics are a very talented and strong team, but they continued to stay in their annoying rut of having long dry spells on offense like last weekend against Nurnberg and were outscored 21-6 in the third quarter that sealed their fate. “We have had situations this season where we had long stretches of offense where we cant get anything going and that was the case again tonight in Giessen. I don´t know if it is lack of spacing, bad execution of sharing the ball, but we have to correct it. When this happens, we tend to fall into one on one situations. If we can fix this then we are a playoff team”, stressed Indiana native and Heidelberg forward John Eggleston.