Corban thanks for talking to German Hoops. Where are you at the moment and did you explore a bit in Europe before returning back home after playing your rookie season with the Kirchheim Knights?

No problem at all! I’m currently in North Carolina, no I didn’t explore any or Europe. I just got home yesterday. 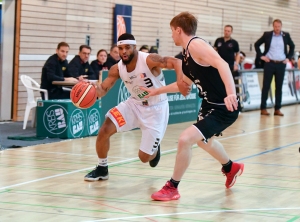 How tough was it being overseas and away from home as a rookie? What was the first thing you did when you arrived home besides seeing family and friends? Did you scope out one of your favorite eateries?

It wasn’t as tough as I thought it was going to be, being away from home. I think I got used to being away from my family in college being so far away and at different schools. First I did when I got back was go to Chick-Fila.

How tough was it for you and the Kirchheim Knights to play a solid season, but land in 9th place missing the playoffs? Did it take a while to digest?

It was really tough to not make the playoffs. It took me a long time to digest the fact that we weren’t making the playoffs. We felt like we played a good season, we just came up short