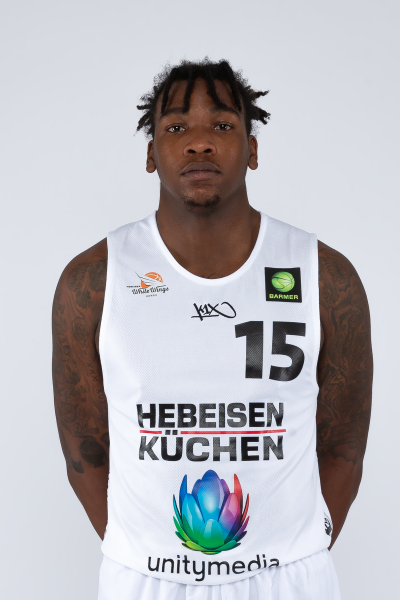 Dorian Pinson is a 22 year old 196cm forward from Greenville, South Carolina playing his rookie professional season with Pro A team Hebeisen White Wings. It hasn’t been the best of starts for the White Wings as they are currently 1-9, but the rookie has held his own averaging 12,9ppg, 5,5rpg, 3,5apg and 1,9spg while shooting 40% from outside. Before going to Lincoln Memorial (NCAA2) he got various high school experience with Southside High School averaging 13.5ppg, 8.0rpg, 4.0apg, 3.0spg, played with the SC Raptors Elite (AAU) and finished at Legacy Charter High School averaging14.1ppg, 6.3rpg, 1.7apg, 2.3spg. He then played at Lincoln Memorial (NCAA2) from 2014-2018 playing a total of 103 games. He was able to score in double figures in his last three season there. In his senior year he played 34 games averaging 15.5ppg, 9.4rpg, 4.1apg, 2.0spg, 1.0bpg, FGP: 58.9%, 3PT: 43.2%, FT: 63.0%. germanhoops.com spoke to Pinson during the summer about basketball.

Dorian thanks for talking to germanhoops.com Where are you at the moment and how has your summer been?

I am in Hanau, Germany and my summer has been great filled with memories, workouts, and loved ones

You had an incredible and decorated career at Lincoln Memorial (NCAA2). How did you experience your first summer transfer period? Did you have a good share of offers?

My first summer transfer was very interesting for me personally trying to figure out how becoming professional works. I had a good amount of offers, teams still reach out but I have committed to a team already and take my business personal so therefore I tell them no to deals and offers

Congrats on signing with the Hebeisen White Wings in Germany. The club is very high on your abilities, but how vital was the fact that your ex Lincoln Memorial teammate Luquon Choice will be your teammate as you embark on your rookie season?

Luquon Choice was very vital to my decision to sign with the White Wings due to chemistry and a winning culture so I am trying to continue that same path with this new team.

How excited are you to be professional teammates with Luquon Choice? He doesn’t talk much and stands out with his play. What is something about him the player that many don’t seem to know?

I’m very excited to play with Luquon Choice again because he is a team first guy and an extreme competitor.

What do you know in general about the country Germany and it’s basketball? Had you followed a bit of ex Lincoln Memorial player Vinnie Bailey who was a rookie in Germany with Vechta and since then has had a solid professional career?

I don’t know much about Germany as a whole but I do know that the league is very good to be a starting point for my professional career, and yes me and Vinnie Bailey are good friends as well he gave me uplifting words once signed and we keep in touch

What kind of personal goals have you set for yourself? You will be on a team that has a lot of talent and you won’t necessarily be the main scoring threat. How do you feel will you be able to help the Hebeisen White Wings the most as a rookie

My personal goal is to come in and be effective in the places most needed for my skill set. I feel I will able to help the White Wings with bringing energy and being a fierce competitor willing to do anything that it takes to help my team win games

Let’s talk about your game. You have the full package can do it all and are very athletic. If you had to compare your game to an NBA player which player do you feel would best match how your style is?

You were always a pretty good outside shooter, but stepped it up a bit as a senior shooting 42%. How confident are you despite playing overseas and shooting from farther back that over time you will be a dangerous shooter at the professional level?

Point guard is my idol position because they can control the games pace and help teammates get the shots they need, if I had to become a full time point guard I’d love to make that transition getting my teammates involved is something I take seriously

The Hebeisen White Wings love that you are a fierce defender and can defend many positions. What do you take most pride on on the defensive end that always makes you happy at the end of a tough 40 minute win?

Disrupting teams offensive schemes are what I take most pride in on defense. If teams aren’t able to run their plays comfortably it makes them struggle with thinking and making the right play

You’re a guy that can fill the stat sheet at ease, but what is a hidden strength in your game that doesn’t always get noticed right away on the court?

My IQ. Many people think I’m just a talented player off of skill but my mind makes it easy for me to learn quickly, make adjustments and it slows down the game for me personally

You were a top NCAA 2 player. Does the fact that you played division 2 put a chip on your shoulder, because you never could show your abilities at the NCAA level? Does this keep you more hungry simply because you always want to get better to show everyone you can play?

Playing D2 made me have a chip on my shoulder definitely but once I realized I could compete with guys at the top level I didn’t mind playing at that level, it doesn’t matter what level you play on, once you step inside the court we are all human and the best usually wins. It does help me strive through workouts and seasons as well because many doubt D2 players because of status but that changes once they see me play

You played at Lincoln Memorial from 2014-2018 reaching the NCAA 2 final, final 4 and Sweet 16. Was winning the SAC tournament twice help ease the pain a bit about never having won the NCAA 2 title?

You had so many great games at Lincoln Memorial, but what memories do you have of your Bill Russell like monster game of 29 points and 20 boards in the 123-122 win against Lenoir-Rhyne? Is that one of those games you would show your grandchildren?

My most memorable games are the final 4 against West Liberty for grinding out a tough important game, The national title was a great learning experience for me at a young age only being a sophomore in college, Lenior Rhyne was one of my best on the road wins throughout my career, but my favorite game was against Queens in the SAC tournament title game when I willed my team to close victory for the championship in my hometown in front of lots of friends and family

You were injured in your junior season, but what did it mean to you to register a triple double of 10 points, 19 rebounds and 11 assists in the win against Carson-Newman?There was also another game against them your senior year where you were an assist short of getting another triple double. Was that one of your top three games in school?

Not only you had a great senior season, but so did 206cm forward Emanuel Terry who played a solid NBA Summer League with the Denver Nuggets putting up 7 and 5 stats. What did you enjoy most about his presence on the court and off? You didn’t always finish, but set him up countless times for crashing dunks.

Emanuel Terry is someone I couldn’t be more proud of watching him grow on and off the court to the player and person he is today and knowing that we helped each other strive and get better every day. I couldn’t be more happier for him, he is getting everything he deserves

How did head coach Josh Schertz groom and prepare you best for a professional basketball career?

Who won a one on one in practice you or Josh Odem?

How did your 2018 summer work out plan look like? On what things will you be working on most so you will be fully prepared for your rookie season?
My summer 2018 workout plan consisted of everything, running, weights, shooting, defending, ball handling, efficiency and consistency, and being prepared for whatever is thrown my way during the season

If you had to construct your very own NBA Rushmore which 4 heads would you pick old or new?

What is your personal opinion of the never ending debate about who is better Lebron or Jordan?

Tracy Mcgrady said that the Boston Celtics will be the Golden State Warriors of the future. Do you see that happening?

Deandre Ayton was the #1 NBA draft pick in 2018. Do you feel that from sheer talent and experience that Luca Doncic should have been the real #1 draft pick?

Lebron James makes amazing passes in every game, but really showcased it in a game this season against the Los Angeles Lakers. He already is like a point guard, but if he played just point guard and concentrated only on playmaking how many assists do you feel would he average per game?

Thanks Dorian for the chat.