Ron Howard is an ex player that spent many years overseas and since retiring has focused his energy on helping unknown players get exposure by organizing games and in many cases helping them find professional jobs. He founded Howard Hoops in 2013 where he brought numerous players overseas to help them find jobs and since 2018 has started the Howard Hoops academy where he helps train unknown players and help find basketball jobs. German Hoops has been covering his work since years and have interviewed him again about his current work. 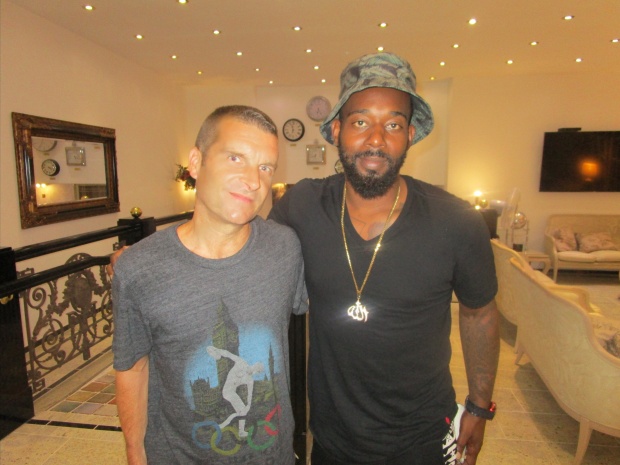 Ron Howard CEO of HowardHoops and journalist Miles Schmidt-Scheuber have had a special bond since 2012. Howard has been organizing games for hungry and lesser known players to get that chance to showcase their skills while Schmidt-Scheuber gives the players media exposure

Hey Miles it’s always a pleasure to talk to germanhoops.com. Thanks for having me. Currently I am in Santiago, Dominican Republic. For me Basketball right now is Amazing!!!

Tell us how Howard Hoops has grown and expanded in the last year? After your success with Howard Hoops in Europe, you now have gone forward with a new idea and started an academy. Tell me how you came up with this idea?

Howard Hoops has grown tremendously in the last year. We have now expanded to developing a Basketball Academy in Santiago, Dominican Republic . I wanted to start the Academy because I was tired of seeing players in America pay trainers who never been to the level these players want to get to. I felt I have the tools and the mind set to guide them in the right direction and the Dominican Republic was the place to be. It takes my players completely out of what their comfortable with in America and makes them fall in love with the process of knowing what it takes to be a Pro.

You have been in the Dominican Republic with the academy. Tell me how a day looks for you?

A normal day for us is waking up at 7:30 for breakfast we are at the gym and ready to practice at 9:00. Am practice consist of skill Development. Two hand dribbling drills one hand dribbling drills. We also work on foot work while handling the ball. We do a lot of shifty footwork. We then work on European movements. Right left hand floaters/jumpers. Everything is high Intensity and game related as I look to put my camp in game like situations. We practice/workout until 11:30 after practice lunch is at 12:30. The next practice is then at 2:30 until 4:45 pm practice is more focused on learning the European style of play. My players run plays and get up and down the floor. I look to focus more on plays and tactics during pm practice. The skill Development we do in the Am relates to pm practice due to the fact that the sets we run are relative to the outcomes of my plays. After practice we eat dinner around 7:00 which is usually at TGI FRIDAYS.

Do you have the same procedure looking for players for the academy the way you do for your Howard Hoops tours or does it differ?

I use the same procedure when looking for players. The main thing I look for is character in the player. I look to see if the player is a good guy. I do research to make sure I’m not wasting anybody’s time and same for me.

I have Marquis Jones a 6’1” guard that has overseas experience already who has the strengths of shooting, decision making, pretty good defender all around tough player I have Shonteay Lovell a 6’6” power forward who has all the tactics he’s similar to a Draymond Green. His strengths are rebounding, blocks, scoring he plays hard. I have Rayloon Brooks a 5’10” guard who has a tight handle can score inside and outside plays tough defense. I have Avery Green a 6’2” guard who has the strengths of scoring. He goes hard nose to the basket and makes things happen. He’s a lefty that can also shoot the three. I have Condale Scott a 5’9” guard who plays tough defense sets the offense up and puts players in position to score. He also can shoot. I have Brandon Smith a 5’11” guard who plays good defense he plays within his role.  His strength is his hustle and mid range jumpers. Last Taylor Jordan a 6’5 guard with a 7 footers wing span that can play 1-4 and competes on both ends of the floor and can put the ball on the floor and make plays as well as score the ball in many ways.

What has been the biggest challenges that you have faced with setting up the academy and make it work? How much work do you have to put into the academy functioning well each day?

The biggest challenge is me having communication with the foreigners and players as far as translating things. I always have to have a translator with me so that I know the other players have and are getting what it is I’m running. If I didn’t have a translator it would be tough because just as much as I run a camp for my guys I invite the Dominicans to come and get better with my guys. It teaches me patience and how to understand that it’s a process of learning. The work that I put in is non stop I’m always working towards getting my guys jobs in Europe, Middle East, Asia, and now the DR. I spend time emailing and talking to different coaches looking to land a contract for my guys

How does your program Howard Hoops differentiate you from the rest?

My Academy is different because my Academy is being trained by an ex player who has been through the grind and played in different places across the world. I push my players to limits they didn’t even know they had because when your going for a contract you must give your all.

What is your philosophy on coaching and your relationship with the player’s development and success? Does it change with the more experience that you get?

My coaching philosophy is simple but effective. I like to play fast but with structure, I run a lot of European sets mixed with American quick hitter sets. The relationship that I get to build with my player’s is a big part to the success of their development. I get to break down their weak points in their game and develop individual skills

How do you continue to challenge yourself and elevate year to year?

The way that I challenge myself is by never staying content. Always wanting better for myself and for others.

One thing I like about you is that you don´t forget past players and always keep up to date with how they are doing. Do you have any current stats how the success rate is for your players landing jobs overseas?

Yea I never forget my past player’s they are the ones that paved the way for these new guy’s. I just talked to Chris Miller over the weekend he just had a great performance in Germany also Ivan Vernon & Phil Jenkins have been playing extremely well for their clubs

What are your programs you are running and plan to run in the upcoming year?

Plans for 2019? I am planning to start have my Academy even bigger in 2019 in Dominican Republic as well as being back in Germany for the Howard Hoops Tour.

Thanks as always for the chat Ron