Recently Isaac Bonga was horsing around with his teammates Quantez Robertson, Mike Morrison and Niklas Kiel during fan photo sessions at the Fraport Skyliners farewell party only a few days after losing a tough 5 game series against FC Bayern Munich. A month later the 2018 NBA Draft was held in the 19,000 arena Barclays center  in Brooklyn, New York only a 5 minute drive away from New York city and he would have had a few more camera´s to deal with than what he had experienced in the Fraport arena as some fans were possibly getting their last photos with the future NBA player. Not only were there many more fans in the huge state of the art arena than Bonga would have had ever seen before in his life, but also guys like 2018 Euroleague champion Luka Doncic or future NBA stars like Deandre Ayton, Marvin Bagley or Trae Young that were strutting around and getting a feel for their own NBA swagger. These are all things that he will have to deal with down the road. In the last two seasons, Isaac Bonga who´s biggest role model is Greek phenom Giannis Antetokounmpo had been present in the various NBA Mock drafts, but fallen in the last season, but his presence was still there even if it wasn´t as great as the season before. Some had speculated that he might drop out and wait another year to polish his skills a bit more in Germany with the Fraport Skyliners in the competitive easyCredit BBL, but instead he stayed in with the likely guarantee from a team that they would select him. Perhaps he also kept his coach Gordon Herbert´s wise words of “teams look at a player´s potential before his stats” in the back of his mind after contemplating if his world championships performance last summer of 6.6ppg, 3.4rpg, 3.3apg, 1.6spg, FGP: 41.5%, 3PT: 8.3%, FT: 69.2% might scare off NBA teams, but really he was never off team´s radars. At the end of his second season there were at times as many as 8 officials from different NBA teams watching him live in Germany. The gamble to forgo another season in Europe and enter now instead of 2019 paid off as the huge German talent was the youngest player in the 2018 NBA draft and wasdrafted by the Philadelphia 76ers in the second round at #39 and then handed to the Los Angeles Lakers joining fellow German Moritz Wagner who was drafted also by the Lakers in the first round at #25. A few months ago Los Angeles Lakers GM Rob Pelinka was in Frankfurt observing Bonga and must have been convinced of his abilities, but still needed that second opinion and I was glad to give my two cents of praise about the German. All of basketball Germany is thrilled about Bonga being drafted.  ““I am delighted to see Isaac drafted. He is an excellent competitor and has worked diligently to achieve this latest success. This is also a huge credit to Frankfurt Basketball and the German National teams. Isaac is a versatile player two-way player with great size and length for his position. The most impressive aspect for me when it comes to Isaac is that he has added to his game every year and continues to do so”, stressed ex Nordlingen head coach Danny Nelson. 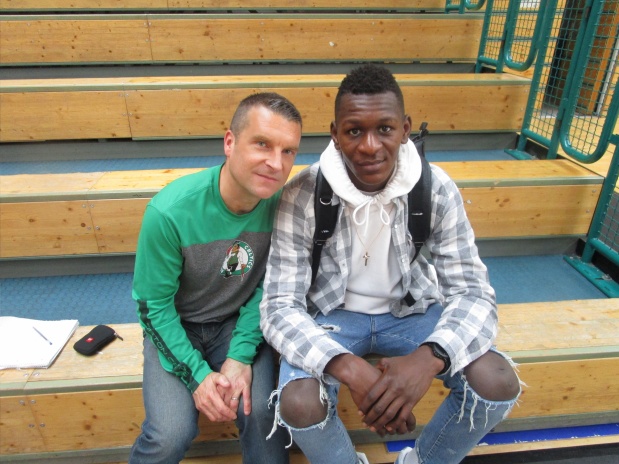 Strengths that were evident right from the start was his freak and unending athletic qualities where he was in good company with teammate Quantez Robertson who some have said if the NBA stressed defense he would have landed there instead of Germany in 2009. Also his unbelievable court vision which he already had as a 16 year old as his no look passes were almost as pretty as Magic Johnson back in the day. Also something that stood out early was his unselfishness something that isn´t self evident at a young age. While his biggest weakeness was his decision making which is common at a young age, his shot which is a work in progress and his ball handling which made him somewhat suspect at being a point guard at the highest level. He came into the 2017-2018 season knowing that he had things to work on with his shot and his decision making while getting a better grip on his calmness as he had a tendency to get wild at times which also is normal for a very young player. He dropped out of school to focus primarily on basketball which paid off. He only played in two competitions, but focused mostly on the BBL which gave him more time to work on his game with assistant coach Klaus Perwas.  Last season in the BBL, he played 34 games averaging  6.0ppg, 3.1rpg, 2.2apg, 1.0spg, FGP: 44.4%, 3PT: 33.3%, FT: 90.0%, played also at Fraport Skyliners Frankfurt II (ProB) playing 7 games averaging 14.3ppg, 4.1rpg, 3.0apg, 2.4spg, FGP: 57.8%, 3PT: 25.9%. In the BBL his minutes more than doubled from the season before from 9 to 20 minutes and he also showed more responsibility. He had up and down phases, but one was sure to see at least one amazing play in each game from a coast to coast sprint and lay in, amazing pass, tough rebound, breathtaking steal as his long arms knew how to get in the passing lanes or just his nonstop athletic ability that had numerous fans and scouts wondering how far this talent would go in the future. He scored in double figures in five games including a 16 point effort against Bremerhaven and a 14 point game against ratiopharm. Another highlight included making his debut in the German national team against Serbia being the youngest German ever. He ended his second professional season with the Fraport Skyliners having significantly having improved his shot as he shot 33% from outside after going 0/9 as a rookie and was at 90% from the free throw line. His decision making and calmness improved while his passing continued to woo anyone that could follow the trail of the pass that is extra ordinary for a 18 year old. He also demonstrated that he had worked on his rebounding as he would not shy away from going inside and possibly getting banged around by the massive bodies inside. 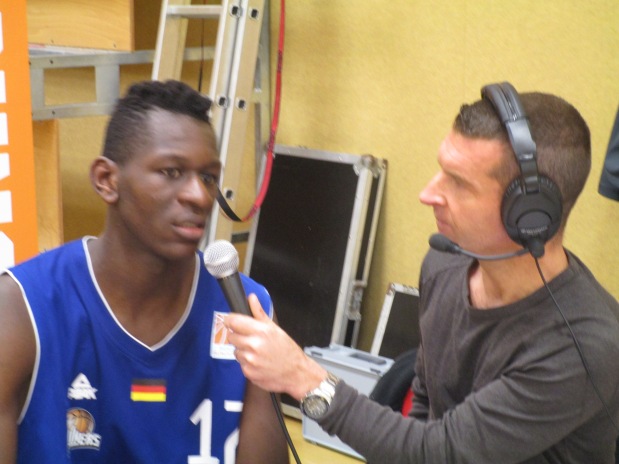 What will be the next step for Isaac Bonga? His head coach from the past two seasons Gordon Herbert would like to have him stay in Frankfurt for another season of grooming or will he get a year of the G-league under his belt where he will get a better feel of the basketball style of the NBA while getting good minutes. Bonga has the basketball world in his hands as with his potential,  sky is the limit. The most two important aspects to Isaac Bonga the basketball player is that he is an extremely hard worker and has a good head on his shoulder. This is something that his head coach Gordon Herbert was easily able to see the last two seasons as his development grew. “ I personally believe that he needs another year in Europe, but that decision is up to him and his agent. The NBA is about isolation basketball and playing in the G-league instead of staying in Europe may be the better way for him. I feel that he made great strides from last August until now. Klaus Perwas did the majority of the work in helping him develop further. He had a vision of wanting to get to the NBA and most important he put in the work. He had a bit of a set back when he injured his rib, but you have to give the kid credit as he took on adversary and got past it. He is a great kid and a great example for all young German basketball players. I wish him all the best”, stressed head coach Gordon Herbert. Not only Herbert sees more grooming in Europe, but also ex Nordlingen head coach Danny Nelson who witnessed Bonga hit his then club with a triple double in 2017. “In my opinion he should listen to the advice of the team that drafts him personally I feel like he should play another season in Europe , especially under Gordon Herbert. ) however it´s important to work with the advice of the team who drafts him”, warned Danny Nelson. If Bonga does return back to Europe and can play another season with the Fraport Skyliners then the day to day grueling practices with Quantez Robertson and being able to absorb in more knowledge from the defensive specialist will be a big plus for his further development as the freak athleticism in Bonga continues to grow to ridiculous proportions.