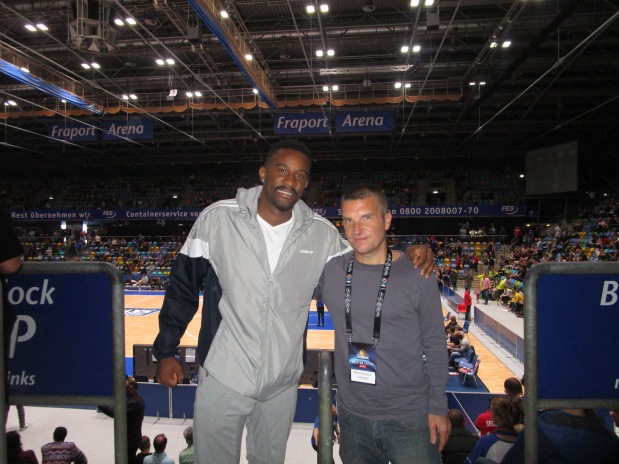 Brandon welcome back to Germany. You are playing this season with Limburg in the German Regionaliga. After a year off how good does it feel to be back in Germany playing the game that you love?

I feel good to be back in Germany. I missed playing so much

Last season was the second time in your professional career that you sat out a season as the first time was in 2014-2015. Did you pursue other interests or did you simply not get the right offers last season to come back to Germany?

In this business that’s just works sometimes. I thought I definitely should have been playing.

How did you experience last season? You were coaching last season. What kind of experience was that and do you think that you will continue to do that later in life after your done playing basketball?

I enjoyed coaching very much.  it is definitely what I will do when I’m done playing. I love to make kids better .

Did you check up with some of your ex German teams last season? Your ex team Leipzig had a less than satisfactory season. Even though they had some good guards like Guy Aud and Cardell Mcfarland, they were unable to hinder having to move down to the Regionaliga. Did you ever think about what may have been had they kept you for last season?

Actually the plan was for me to come back the next season but they changed coaches and he wanted an import wing more than a guard. I love that city and I hate it for the fans there. Leipzig will always have a special place in my heart .

How did you keep in shape? Did you have a certain routine that you kept to continue to be ready if a team called?

I had access to a gym anytime I wanted so I stayed ready .

You have a new chance now with Limburg. How do you like the city? It is much much smaller than Leipzig and Magdeburg, but probably more similar to Aschersleben. How have you adapted to your new surroundings?

I like the city a lot. Small but everything I need is here. The people welcomed me here with open arms .

How did you come to sign with Limburg. Head coach Danny Stallbohm must of really went through his basketball black book to find the right contact to find you?

I got coach Danny contact through a former coach I played against in the Pro B and he said it would be a good opportunity for me to get back into Germany so I reached out to coach and he decided to bring me in.

Limburg has a very young team. What has been your impression of the team and what do you feel is the team capable of accomplishing this season?

I like my team a lot. We are not going to out score opponents, but we will have to out work them. My goals is to win as many games as possible.

You and Justin Stallbohm will be the leaders of the team. How excited are you to be running a young team. Where do you see taking your game this season with Limburg?

Yes me and Justin clicked as soon as I got here. He is a good player and a great competitor and everyone feeds off his positive energy.

I can imagine you averaging 20-25 points and filling up the stat sheet. Do you feel that the expectations are high and will you come to terms with them?

High expectations is what I expect of myself. I just want to win games and have a good season.  If I focus on that good stats will follow.

Limburg has had some great players in the last years like Ron Howard, Kris Douse, Paul Dick or Kevin Yebo. Six years ago, with Magdeburg you averaged 16/7 stats as a 24 year old. How confident are you that you not only will be an impact player at age 30, but could eclipse those stats from then and be a very potent player at your age?

I don’t feel 30… lol .. but I’m smarter and more experienced now to the European game. I think it will come to me more easier now.

If you had to construct your own NBA Rushmore which 4 heads would you chose?

Lebron James failed to win his fourth NBA title and is still three away from Michael Jordan. Where does Lebron stand right now in your opinion in the never ending debate of who is the best of all-time? Answer

Lebron is one of the best ever. Jordan is one of a kind. There will never be another Jordan.

To be honest I wasn’t a big Westbrook fan at first but the way he plays the game makes you a fan. I don’t think he is hunting stats I think he just wants to win.

How do you summarize the 2017 NBA Draft. What sleepers do you see playing a role in the NBA? Answer:

I think the Draft was good but the player I’m excited to see the most is Dennis Smith Jr.  He is exciting to watch.

Most people think that it won’t work but I believe that they will take pressure off of each other. I think they need another piece to be a serious contender.

I think they both benefited from the deal but Boston may have the edge in this trade .

Thanks Brandon for the chat.