Steven Bennett is a 29 year old 173cm point guard from Los Angeles that is playing his sixth professional basketball season and first with the Dresden Titans. As a rookie he played for  the Spot Up Medium Baskets Braunschweig. With Braunschweig he played 10 games averaging 22.7ppg, 4.1rpg, 5.1apg, 2.4spg, 2FGP: 57.5%, 3FGP: 34.2%, FT: 76.6% He is one of the few special players that has a tenacity and will to win that is unmatched; it is impossible to judge him based upon height alone because he can compete with anyone in the world. He has proven this in the Maui Invitational division I tournament in 2010, and was recognized as one of the top players (All-Maui Award) from a field of other top US point guards such as Kemba Walker, Kailin Lucas and Brandon Knight. Bennett is known for his great court vision and passing ability, and is able to get in the lane at will and finish against anyone with either left or right hand. Every team bases their defensive strategy around Bennett and is forced to take create his own shot and take his three point shots off the dribble. He is an excellent shooter, but wants to continue to improve his already respectable 40% three point percentage. Steven is known for having excellent leadership skills, and is highly respected by all of his peers and coaches. He played at Citrus JC (JUCO) from 2007-2009 and then played at Chaminade (NCAA2). In the summer of 2013 he also found experience playing for the  Rockingham Flames (Australia-SBL) He played three games with 2013 NBA draft pick Dennis Schroeder as a rookie in the Pro B. In the 2013-2014 season he played for the LTi Giessen 46ers (Germany-ProA) playing 37 games averaging 11.1ppg, 3.0rpg, 3.4apg, 1.2spg, FGP: 44.4%, 3PT: 32.6%, FT: 66.7%. In the 2014-2015 season he played for CEZ Basketball Nymburk (Czech Republic-NBL) playing  5 games: 5.2ppg, 1.2rpg, 3.8apg, FGP: 31.3%, 3PT: 30.0%, FT: 87.5%; VTB United League: 1 game: 0pts, 1ast, left in Jan.’15, later that month moved to JBC MMCITE Brno (Czech Republic-NBL) playing 12 games averaging 14.0ppg, 3.7rpg, 3.7apg, 1.5spg, FGP: 50.7%, 3PT: 27.7%, FT: 74.1%. He last played in Germany for the  Finke Baskets Paderborn (Germany-ProA) playing 13 games averaging 10.3ppg, 2.2rpg, 2.5apg, FGP: 41.8%, 3PT: 30.8%, FT: 71.8%He spoke to German Hoops about basketball.

Steven thanks for talking to German Hoops. Where are you at the moment and how has your summer been going?

I’m currently in Toronto, Canada. My summer has been great, just training and getting ready for the upcoming season.

Welcome back to Germany. I was happy to hear that you recently signed with German Pro B Dresden Titans. How happy and excited are you to be back in Germany?

I am very excited to be back in Germany. I have played the majority of my career there and it feels like home. The fans have always been great to me there.

Last season I kept waiting to read about where you had signed, but nothing came. You sat out last season. What exactly happened last season? Did you need some time to refocus and get away or did the right offer just not surface?

I actually did sign and play for a team in North Cyprus, but I broke my wrist and didn’t get to finish the season. I’m looking forward to playing a full season with Dresden.

What things did you do with your game in the last year that enabled you not to lose a step, but be able to come back strong, motivated and confident to make an impact again as a professional player. How tough was it being at home and not playing while many of your friends were balling worldwide? What kept you focused in the last year and kept you mentally stable?

If there’s one thing I’ve learned over the past few years, it’s been how to train and take care of my body. How hard I work in the off season directly translates to how well I’ll do in season, so that’s always motivation for me.

How was the summer transfer period for you this summer? Did you have ample offers and what was key for you signing with Dresden?

I did have some opportunities in the works, but what made me sign to Dresden was that both sides talked about a possible signing last year and that energy just carried over into this upcoming season.

Definitely, the team’s main goal is to get back to Pro A and that is what we will be working towards.

How excited are you to be playing with American sharp shooter Travis Thompson? He is a guy that can light up the scoreboard and hit Lich for 36 points in the Pro B. Do you see yourself having a very high assist count coupled with being able to score at ease?

I always look forward to playing with new teammates, especially shooters. They make what I do easier.

Obviously your leadership will be key as well as being the best playmaker possible so the team will garner many wins. What do you expect from your own game this season.? You averaged in double figures in scoring in the Pro B with Giessen and Paderborn and in your only other Pro B season with Braunschweig 22.7ppg, 4.1rpg, 5.1apg, 2.4spg. Do you feel pressure to have to live up to what you did in the past?

I don’t feel pressure, but I’m always challenging myself to be better than I was before.

You may play against double license player Isaac Bonga of the Fraport Skyliners who at age 17 is a projected 2018 NBA draft pick and some see him becoming better than Dennis Schroeder. Could this be one of the ultimate challenges this season guarding a 205cm point guard with a wingspan of 2.19 meters?

When I interviewed you in September 2013 when you had only been a short while with your then new team you stated this about TJ DiLeo. “He is out of Temple and a tough player. I think his experience at Temple will help him and us this season. He has a good guard body and shot. How proud have you been of his development to a solid EasyCredit BBL player?

TJ was always a hard worker, and I knew that he would have solid pro career. 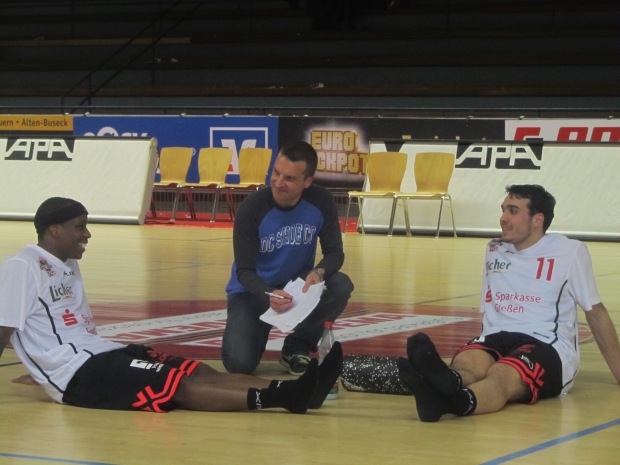 You were teammates with Dennis Schroeder for four months in 2013 and four months before he was drafted, I asked you if Schroeder was NBA material and you said this. “He could go to the NBA. He has a very tough mentality and is so quick. He has a great IQ for a young guard. We go at it in practice. We pressure each other in the pick and role”. How have you seen his development over the years? Could he become a top 5 NBA point guard down the road?

If you had to construct your own NBA Rushmore which 4 heads would you chose?

Lebron James failed to win his fourth NBA title and is still three away from Michael Jordan. Where does Lebron stand right now in your opinion in the never ending debate of who is the best of all-time?

He’s number 2 to Jordan with potential left in his career to tie or beat him.

Russell just is a competitor, and does whatever his team needs to win.

They definitely have enough talent to make a serious run, but I would argue that they do need more to get by the Warriors.

War for the Planet of the Apes.

Thanks Steven for the chat.