In the last few days in Las Vegas, nothing was out of the ordinary except for in Paris where people were going crazy after their Les Bleues reached the 2018 World Cup, but in the city where gambling is a way of life all was normal as the city remained a sizzling hot stove in the desert with the slot machines in full swing being operated mostly by tourists, the hotel pools packed with guests looking for a major cool down and in the Thomas & Mack center, fans witnessed nonending basketball action with 15 games being played and packed action as many of the NBA future stars were at work and didn´t disappoint anyone. As usual Fraport Skyliners past and maybe present as some are still hoping that Philip Scrubb and Tai Webster might return back to Frankfurt as the Skyliners budget was suddenly heightened with the money from the Bonga Lakers signing, but latest reports have speculated that this won´t be the case, but dreaming to keep that Skyliners chemistry is always possible. Also other Germans were in action like Moritz Wagner while ex Artland Dragon big man Isaiah Hartenstein sat out the 104-90 win by the Houston Rockets over the Los Angeles Clippers on Monday due to an injury in his right hand, but it was nothing serious.

The only Fraport Skyliner in action on Monday was Mr Canada Philip Scrubb with the Washington Wizards. After having a solid, but not spectacular NBA Summer League debut in 2015 with the Memphis Grizzlies and Toronto Raptors, his run three years later has been more shocking than disappointing when knowing that he has been a reliable sniper his whole career. It has been like night and day in the shooting department for him. The ex Carleton(CIS) star who won seven titles under head coach David King has made a name in basketball circles as a very reliable shooter and given the word sniper a new meaning. In school he never shot below 40% from outside and in his last four years at school shot a blistering and mind blowing 53%, 46%, 45% and 48% from the parking lot. His precision shooting didn´t change as a professional either as in his first two seasons with the Fraport Skyliners, he shot 44% and 45% in the easyCredit BBL from downtown and last season won the scoring crown. Two seasons ago in the Fiba Europe cup, he shot out the lights at 52% and even in international play with Canada, he hasn´t had a drop off either shooting 46% at the marchand Cup winning the Gold in Puerto Rico in 2015 and shooting 48% at the Fiba America´s cup winning a bronze in 2015 in Canada. Shooting like a Larry Bird and it being simple is as normal for Philip Scrubb as it is over the years always seeing Las Vegas show time legends like Liberace, Frank Sinatra and Celine Dion wooing the fans in the hot desert. Scrubb´s shooting range and accuracy has always been amazing, but so far this summer, Scrubb has surprisingly put up the goose egg going 0/12 from the field. Despite the basket being annoying to hit as if he had been strapped on with a blind fold than it being as usually easy to hit as the ocean for him, the Canadian did witness his team the Wizards beat the Philadelphia 76ers 87-75. As usual the starters with Troy Brown Jr, Devin Robinson and Thomas Bryant dominated and combined for 61 points to help seal the victory. Scrubb once again got a chance again getting minutes as he got the fifth most for the game with 16, but couldn´t capitalize going 0/5 from the field. His best stat was three rebounds including two offensive rebounds as he remained aggressive in the paint. An old adage for shooters is when you aren´t hitting, keep shooting. The Canadian has confidence enough to get out of the slump, but what most likely will annoy him the most is that his most prized possession his shooting has let him down the most when it really counted most for that NBA attention to have his prize possession help him.

Ex Fraport Skyliner Shavon Shields had another fine outing despite the 105-97 loss against the Detriot Pistons with the New Orleans Pelicans. Unlike the Scrubb´s and Webster´s who have established themselves overseas, but haven´t gotten major minutes in Las Vegas, Shields has received the full trust from the Pelicans starting games and against the Pistons logged 33 minutes and produced 14 points and shooting at a high clip at 62% form the field and also filled up the stat sheet like he did in Germany and Italy the last two seasons getting four boards, five assists and two steals. He hit some nice three´s and found Cheick Dialo a few times for easy baskets. Even if the Danish national player will suit up in the Euroleague this season for Baskonia, he now is firmly on the radar of many NBA teams and continuing to follow his career will be interesting. On Tuesday there were two Frapor Skyliners in action with Tai Webster and Isaac Bonga. Webster helped the Miami Heat to a 98-90 victory against the Utah Jazz, but logged only nine minutes. The Heat were led by Bam Adebayo with 24 points and Ike Nwamu who played at UNLV(NCAA) dumping home 18 points. Webster was in the shadow of Derrick Walton Jr again as he got 20 minutes and scored six points, gave out five dimes, got a rebound and stole two balls while shooting 42% from the field. Webster was versatile filling up the stat sheet the best way he could getting two points, a rebound, an assist, a steal and block and was perfect from the field. His NBA Summer League experience this time around hasn´t been as different as his rookie season with the Golden State Warriors in 2017 as the minutes have been little, but adding any kind of new experience will be beneficial for the ex Nebraska(NCAA) stand out as he ventures into his second professional season. 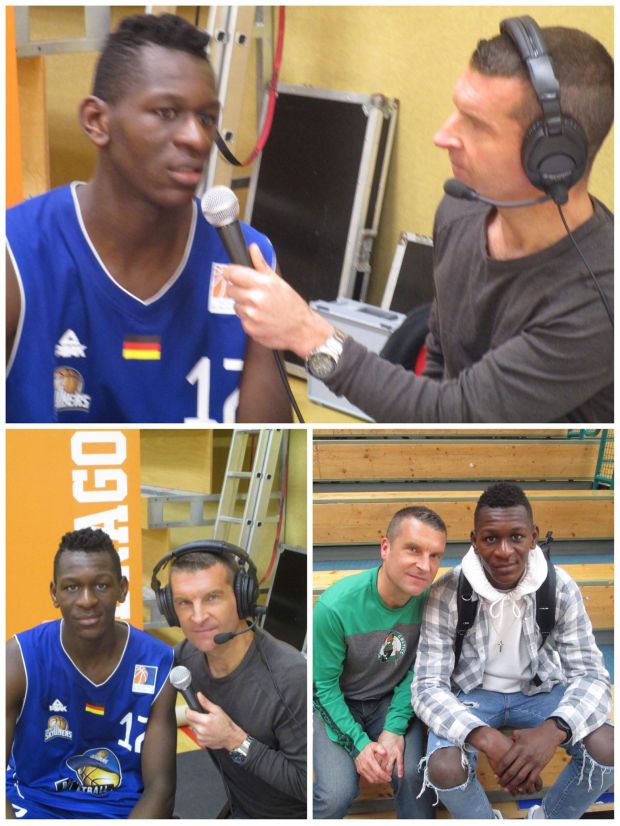 Isaac Bonga played his third NBA Summer League game and helped the Los Angeles Lakers remain unbeaten and move to 3-0. The Los Angeles Lakers were scoring on all cylinders defeating the New York Knicks 109-92 that featured four guys in double figures. Josh Hart was the work horse once again netting 27 points while Jeff Ayres had 17 points and Nick King who played at three schools including Memphis, Alabama and Middle Tenessee dropped 15 points. 2018 NCAA finalist with Michigan Moritz Wagner got off to a quick start getting seven points, two boards and two steals in nine minutes, but then had to leave as he hurt his knee. Isaac Bonga came from the bench again and logged 11 minutes dropping three points, gaining a rebound, presenting a dime and making a block while going 1/2 from the field showing his calmness for only 18 years old and not going wild and forcing too much something that is hard to do at the NBA Summer League when your aiming to please and triying make a presence. Bonga continues to shave down his turnovers in the three games from seven to four to three. One of Bonga´s main area´s of improvement continues to be his shot something that got better last season with the Fraport Skyliners as well as his ball handling. Just how well this improves will determine just what position he will play down the road. Many experts and critics in Europe haven´t expressed their support in him being a point guard simply because his ball handling is suspect and getting the offense going to slow, but when you are 18 and the same height as Magic Johnson, the possibilities of keeping that point guard dream alive seems realistic for the Koblenz native. The possibilities of Bonga playing many different positions is a reality, but wouldn´t it be a delight if he could play point guard in a Lakers offense where Magic Johnson invented the word Showtime and gave the basketball world so much enjoyment? Obviously versatility is always a plus, but when you have a guy like Magic Johnson who obviously is fascinated by the Bonga wonder boy from Germany, and the guy that gave the point guard position a new dimension when he was playing, it could become more and more possible that Bonga will be able to say “In your face” one day to the critics when he is leading the charge on the break with Lebron James streaking hard to the bucket and he is running the Lakers offense in the near future.